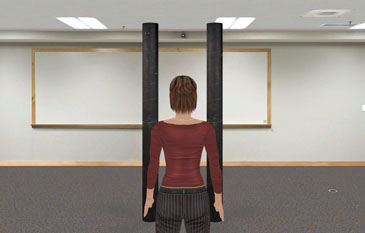 It's not every day that an abandoned room once used as a storage unit becomes a dream come true for researchers. But in a collaborative effort between the College of Social and Behavioral Science, the College of Engineering, and also from the senior vice president for academic affairs, the Social Behavioral Science Building now features a state-of-the-art virtual reality space.

Psychology professors Sarah Creem- Regehr and Jeanine Stefannuci, and computer science professor William Thompson are conducting virtual environment research concerning spatial cognition studies with virtual reality. They have added what is known as an avatar—someone who is meant to be a digital replica of yourself in the virtual world that mimics every movement you make.

For years, Regehr and Thompson conducted their research in empty classrooms around campus but longed for a permanent space that could better reach the optimum potential for the virtual worlds that they create. After receiving funding from the university, a campus-wide search for optimal space ended in an old storage room in the Social Behavioral Science basement. Regehr described the room as "an unfinished pit. It had an ante-room and then the next room had this huge pit that dropped about three feet down into the ground."

Regehr, Stefanucci, and Thompson had their hands full cleaning out the 30x40 storage space that contained 20 years worth of miscellaneous items. With renovations nearly complete, there will be an open house during fall semester for those interested in viewing the largest space in the United States solely dedicated to being a virtual lab.

Only time will tell but the interdisciplinary research team expects big things out of their newly renovated space. Stefanucci says, "I would love to see this technology used for medical purposes—specifically how people perceive their bodies due to eating disorders."