Bryan comments on recent tragedy at The Pathway Home 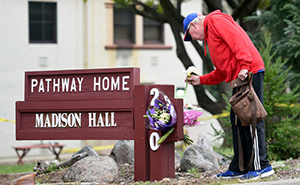 On Friday morning, Albert Wong, an Afghanistan war veteran and a former program participant, entered The Pathway Home campus. Hours later, he and three Pathway staff members were found dead. Craig Bryan, associate professor of psychology and director of the National Center for Veterans Studies, said that veterans with post-traumatic stress can become violent and that therapists were often trained in escalation. But they can be caught in a Catch-22, he said, in which continuing treatment with an increasingly aggressive patient is potentially harmful to both parties, but so is ending treatment. Learn more.