The world’s oldest animal paintings are on this cave wall 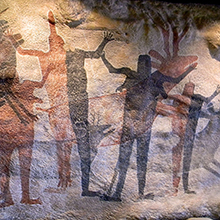 The new painting—a series of three to four Sulawesi warty pigs and an outline of human hands—was discovered by Basran Burhan, a doctoral student and co-author of the study, in an isolated valley reachable only by foot. After taking precautions to ensure the collected samples were untouched, the authors calculated that the images must have been made at least 45,500 years ago.

“This is an important contribution,” says James O’Connell, an emeritus professor of anthropology at the University of Utah, who was not involved in the research. “The results echo and extend the time range for previously reported Late Pleistocene imagery from Sulawesi.”