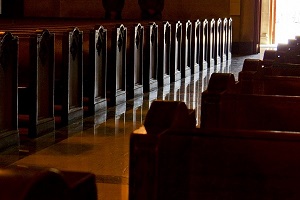 A study conducted by Ed Diener, professor of psychology and other researchers from two universities found that individuals are usually less religious when their government offers better social services like education, healthcare, and welfare. This study, “Religion as an Exchange System: The Interchangeability of God and Government in a Provider Role,” proved that if the benefits of religion can be gained from a source other than religion, the attractiveness of practicing a religion is reduced. Read more.