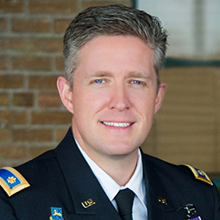 Brent Taylor did not only make his mark serving the Utah Army National Guard and as mayor of North Ogden. He was also an academic and had been studying for a doctorate in political science from the University of Utah when he was killed in November while serving in Afghanistan. Accordingly, the University of Utah awarded him posthumously with a doctorate degree and also announced creation of a scholarship in his name.