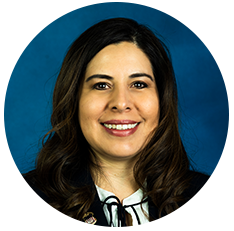 Andrea T. Martinez is the Acting United States Attorney for the District of Utah, appointed on March 1, 2021, by virtue of the Vacancies Reform Act. As Acting U.S. Attorney, Ms. Martinez will serve as the District’s chief federal law enforcement official until a successor is nominated by the President and confirmed by the U.S. Senate.

Ms. Martinez is a career prosecutor who has dedicated her professional life to public service. She has served in the United States Attorney’s Office for more than a decade. As an Assistant United States Attorney, Ms. Martinez has been involved in the full spectrum of violent crime prosecution including drug trafficking, federal firearm, and child exploitation cases. She also prosecuted crimes in Indian Country. Ms. Martinez has held an array of leadership positions within the office, including First Assistant United States Attorney, Violent Crime Deputy Section Chief, Senior Litigation Counsel, Violence Against Women Act Coordinator, District Diversity Chairperson, and Project Safe Childhood Coordinator.

Ms. Martinez began her career at the Salt Lake County District Attorney’s office where she prosecuted felony narcotic, aggravated assault, special victim and homicide cases. She also prosecuted cases while assigned to the Juvenile and Misdemeanor Divisions. Ms. Martinez is from Utah. She graduated from the University of Utah, S.J. Quinney College of Law in 2001, and was awarded a Bachelor of Arts degree, with a double major  in Sociology and Communications, and a Criminology Certificate from the University of Utah in 1998.