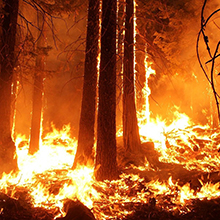 Since the late 1990’s, more deadly wildfires have swept the western US, due in part to climate change, in part to forest management practices and in part to development along the wildland-urban interface—meaning more people live in fire-prone places. “It’s been really stark raving mad, a real out-of-control madhouse,” says Tom Cova. "Those fires have complicated everyone’s understanding of how residents get out of the way of fires—and whether they choose to leave at all."

California's fire season has been bad. But it could have been much worse