Can veterans lead the way on preventing suicide? 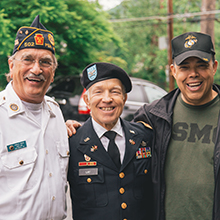 Craig Bryan, who leads the National Center for Veterans Studies at the University of Utah, advises his team of clinicians to pose open-ended inquiries to elicit relevant details.

“We often ask questions like ‘How do you typically store your guns?’ and ‘Why do you store your guns that way?’” says Bryan, an Air Force veteran who deployed to Iraq in 2009. Contrary to the common assumption that veterans will recoil from considering precautions, he adds, “I’ve found that, on the whole, they’re open to the idea.”