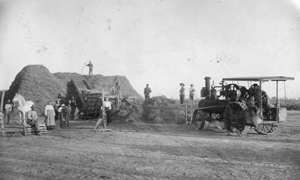 "People are going to go where they can do the best for themselves and their families. For these early settlers, they're going to settle where the agriculture is best," said Peter Yaworsky, lead author and doctoral student of anthropology.

The new study proposes that agricultural productivity drove dispersal patterns in a process that led the current distribution of Utah populations today. Utah anthropologists adapted a well-known ecological model, and tested its predictions by combining satellite-derived measures of agricultural suitability with historical census data. They found that the model accurately predicted the patterns in which settlement occurred in Utah, as well as the present-day distribution of people. Read more.