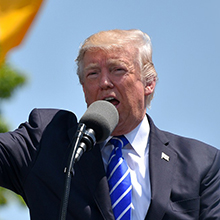 “What I would call a kind of Utah Republican approach to Trump,” Burbank said, “which is to recognize that he is the incumbent Republican president. But at the same time, not wanting to get too close, in fear of the president somehow doing something that might hurt them come election time.”