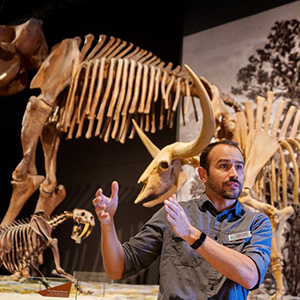 Despite its name, the ice age saw its fair share of wildfires, particularly towards the end.

Humans were partly to blame, as was likely a catastrophic comet that burned some 10% of the earth’s surface almost 13,000 years ago. But Faith and his colleagues found another surprising culprit: the disappearance of large grazers.

“As these ancient giants became extinct, there was nothing left to keep grasses under control,” Faith said, standing in front of a few of Utah’s own long-gone ice age behemoths: the short-faced bear, the mammoth, and the ancient bison. “Instead of mammoths and mastodons, fire became the ultimate herbivore.”