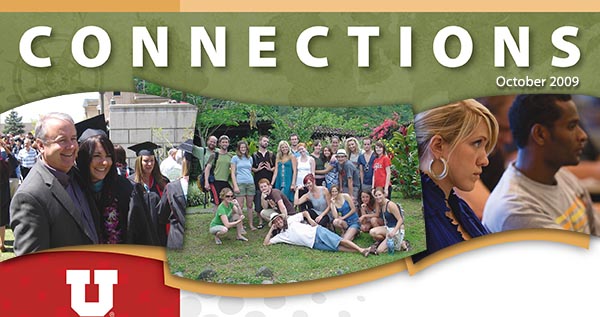 All The Right Reasons

For psychology grad Julio Jarvis, there are right and wrong reasons to pursue a university degree. (more)

"Driven to Distraction: 'It's crazy to be doing it.'"

Professor of Psychology David Strayer was recently interviewed on PBS Newshour with Jim Lehrer where he says your risk of getting in an accident is eight-times greater than a non distracted driver. "Pretty much everybody that I have ever spoken with has a personal experience of seeing somebody who's driving down a road, looks like they're drunk, they almost get run over, maybe they even see an accident and, lo and behold, the person hasn't been drinking — they've just been intoxicated by using a cell phone," Strayer said. You can read more on Strayer's research and watch a driving simulation at the NYTimes.com

Professor of Economics Norman Waitzman weighed in on the topic for health care reform during a PBS Special Report. Waitzman provided analysis, discussion, insight and engagement on universal health care in the United States. Waitzman's main areas of research address the cost of illness with a special focus on congenital conditions and preterm birth and the relationship between socioeconomic status and health.(more)

Howard Lehman, associate professor of political science, and Anjali Pai Hallett, associate director for international programs and services at the U's International Center, spearheaded the creation of the International Leadership Academy. ILA is a unique program in which each student is assigned a mentor, from the community, engaged in international affairs within government, business or a nonprofit organization. The academy was created to complement any major, which allows students to add an international dimension to their chosen field of study and develop them as successful international leaders. (more)

In September 2009 state authorities made U of U anthropologists permanent stewards of Range Creek Canyon. Multidisciplinary research projects in anthropology and geography have unearthed and cataloged thousands of artifacts from the canyon. Range Creek has been recognized as a national treasure due to the high density of virtually undisturbed prehistoric sites that have been found. Features of the canyon include granaries on cliffs, rock art panels, ruins and artifact scatters. Most of the artifacts are associated with the "Fremont," a term used to describe Utah's earliest farmers, who inhabited the region from about A.D. 300 to 1350. (more)

The Forum will focus on three overarching themes related to global aging in the 21st Century. Keynote speakers include, Dr. Alexandre Kalache, Dr. Sara Arber and Dr. Eileen M. Crimmins. Click to download a printable program for the Forum and Symposium. Click here for more information on the symposium.

The Deseret News featured three Hinckley Institute of Politics interns on the front page of its Aug. 24, 2009, issue. According to the article, James Egan, Emily Bennett and Katie Calvert spent the summer in New Delhi, with a nonprofit aid project called Maitri, performing health checks and gaining funding for the organization. You can read more about the article here.

Tom Painter, the director of the Snow Optics Laboratory at the U of U, found that dust can speed up snowmelt by as much as 35 days. "Already we have more than doubled the amount of dust we've typically observed during the last six years," Painter said. Painter was published for his article, "Biological consequences of earlier snowmelt from desert dust deposition in alpine landscapes," in the Proceedings of the National Academy of Sciences June issue. You can read about Painters latest findings on snowmelt at Los Angeles Times and New York Times.