"I never intended on it being more than just a couple of studies."

University of Utah's Dr. David Strayer, professor of psychology, has gained such national prominence through his research in driver safety that nearly 10 years after his first published study, Driven to Distraction, he will appear in January on the "Oprah Winfrey Show." (Read more)

Can a Neighborhood Make You Fat or Skinny?

In the past 25 years, Americans obesity risk has trended upward at an alarming rate. Approximately one-third of all adults are obese today, up from fewer than 15 percent in the mid 1980s. Obesity is a risk factor for diabetes, heart disease and certain types of cancer. Consequently, there is keen interest in identifying modifiable risk factors that are associated with obesity. (Read more)

Point, Click, and Vote: The Future of Internet Voting

Associate Professor of Political Science Thad Hall spent time in Estonia this last October observing the countries municipal elections. Estonia became the first country to implement Internet voting back in 2005 and in its last election nearly 20 percent of the voting was done online. "Estonia recognized the importance of the Internet.  They became an independent country in the early 90's, and they were really forming their government right around the time the Internet was exploding, so they recognized the Internet could be a really valuable tool for facilitating democracy," Hall said.  Hall is an election technology and voting expert and is working to modernize U.S. voter registration and is currently the co-principal investigator for the Pew Charitable Trust's Make Voting Work Initiative. You can find Hall's latest research by visiting his home page.

Are societies getting healthier as they get older? How can countries benefit from an older workforce? How do multiple generations co-exist and what is the balance among family, market and public supports for older people? These are some of the questions that Professor of Sociology Zachary Zimmer addressed during his Faculty FaceTime interview at the University. Zimmer organized the Thirteenth Annual Rocco C. and Marion S. Siciliano Forum, and described it as "a very informative forum and of interest to a lot of people."

Anthropology is now offering a minor in Integrative Human Biology. IHB is a field that integrates biological and behavioral sciences and provides students with the background they will need as professionals in health sciences and many other fields that engage directly with aspects of human adaptation and welfare.

The Department of Geography celebrated Geography Awareness Week , Nov 15-21. "The week turned out to be a huge success and more people showed than we had anticipated," said Greg Fryer, a geography graduate teaching assistant. Lectures were held on climate change and on urban sustainability. Other events included career panel discussions, an open house, exhibits and a movie night. "Our speakers and panelist were superb," Fryer said. "It was standing room only during the lectures!" Geographic analysis and Geographic Information Systems (GIS) skills are in high demand across a wide range of fields and careers. GIS technology "is profoundly changing the way we conduct science, business, government and our daily lives," said Harvey Miller, professor and chair of geography.

Professor of Economics Korkut Erturk's research on economic growth and development show there is a, Light at the End of the Tunnel, But Where To? "The fear of inflation itself poses a threat for the credit worthiness of the United States as an international net borrower," Erturk said. "The advantage the United States enjoys in being able to issue its liabilities in its own currency can turn into a liability." To read more about Erturk's work on the global economy, visit his home page.

Our very own Dean David Rudd, a former Fort Hood psychologist, was asked to share his military expertise when he was recently interviewed about the Nov. 5, Fort Hood attack. "It often times is a complex mixture of personal and other kinds of circumstances that drive people to make a decision to do something violent," Rudd said. "We have people who are surviving combat injuries today who would have never survived them before." Rudd said the stigma of the masculine culture in the military prevents soldiers from reaching out for help for fear of appearing emotionally weak. You can read more about the attack at the Deseret News and The Washington Post.

Giving to CSBS this season...

We invite you to give to the College or one of the departments this holiday season. A particular need this year is our CSBS Honor Roll Scholarship fund. You may fund a full scholarship for $3,500 but any amount is welcome. Please visit our giving website to learn more about College scholarships. An undesignated gift will go into the scholarship account. Give Online 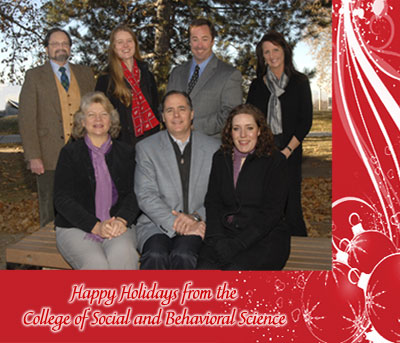