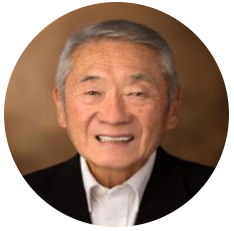 Raymond Uno earned four degrees from the University of Utah – a bachelor's in political science in 1955; a bachelor's of laws in '58; a master's of social work in '63; and a juris doctorate in '67.

Raymond, a Japanese-American, was incarcerated with his family for three years during World War II at the Heart Mountain Wyoming Concentration Camp. Incredibly, he volunteered for military service a few years later and became a special agent in the 441st Counterintelligence Corps and was honorably discharged as a Korean War Veteran.

Raymond has volunteered for community activities and organizations for over 55 years. His U affiliations include the Friends of KUED, and the University of Utah Alumni Association. He has presided over the National Japanese American Citizens League, the Utah Citizens Committee for Civil Rights, and the Utah Minority Bar Association.

Raymond continues to lead an active life, playing basketball for the Japanese Church of Christ's team (at 80 years young) and doubles tennis. He assists his son with a restaurant and spends as much time as possible with his wife, Yoshiko, and their grandchildren.