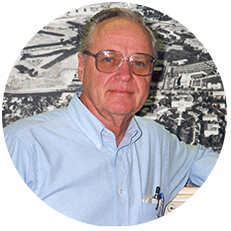 Merrill K. Ridd is an emeritus professor of geography. He graduated from the University of Utah with a BS in 1954 and MS in 1960. Ridd earned his PhD from Northwestern University in 1963. He is a Korean War veteran, having served from 1950 to 1956. Ridd was the project leader of Multiple Use Research at the U.S. Forest Service Intermountain Experiment Station, Ogden, Utah from 1962 to 1965. From 1965 to 1967, he was associate director and editor of the Earth Science Curriculum Project for the National Science Foundation, culminating in Investigating the Earth, a secondary school textbook and laboratory manual, while conducting workshops for teachers and professors in the West, Washington D.C. and Bangalore, India. He served on the faculty of the Geography Department, University of Utah from 1967 until his retirement in 2004, and as chair person 1971-1979. He hails the outstanding and inspiring teachers across the U campus in the 1950s, Hawkes, Cottam, Eardley, Eyring, Durham, and others for launching his career.

In 1975 Dr. Ridd established the Center for Remote Sensing and Cartography with funding from NASA, conducting and publishing research as a training ground for over 45 graduate student advisees, first on campus and then at the University Research Park. He has published over 70 technical papers and reports, many with students as lead author, and has presented some 50 papers on remote sensing at national and international conferences. Dr. Ridd is the author/editor of several books on geography and earth science education.

Having a background in geography, geology, and ecology Dr. Ridd was the lead-off instructor of the five professors who introduced the Environmental (& Sustainability) Studies program at the University of Utah.

With a team of multinational scholars he organized, co-authored, and edited Remote Sensing of Human Settlements in 2005 for the American Society of Photogrammetry and Remote Sensing. Many former students were significant contributors to the volume. Dr. Ridd claims that most of the knowledge he gained over 43 years of advising graduate students, through a period of rapid transition, he acquired from working with these incredibly bright and industrious young people with their individual interests. They are amazing.  All of them gained professional careers and many became leaders in the field of education and government.