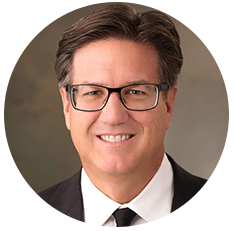 A native of Salt Lake City, Strong graduated from Skyline High School in 1979 and the University of Utah in Salt Lake City in 1985, where he earned a B.A. in economics and was a member of Beta Theta Pi fraternity. He started in the automotive business working part-time as a lot tech and car washer at his father's Porsche Audi dealership in 1976. "I earned 50 cents an hour and I can still remember my father, David, the dealer principal looking at his name on the door of his office," Strong reminisced. His grandfather had a Volkswagen dealership a block away. "So I grew up with these brands in my blood and the penetrating desire to run my own dealership someday," he said.

Strong advanced from parts counter sales to car sales to used-car manager to general manager before taking over the business when his father retired. Today, he and his brother, Brad, own Audi, Porsche and Volkswagen dealerships, all in Salt Lake City. And his experience was called upon by Audi when they asked him to serve on the Audi of America Dealer Council from 2006 to 2009, two years as national chairman. He traveled to Germany three times to meet with the automaker's board and discuss ways to elevate the brand in the United States. "These were heavy lifting years for Audi, when they were just starting to get super traction in the U.S.," Strong said. "I feel we helped build a solid runway for Audi to take off, and the brand is now soaring to record highs."

A committed member of the Church of Jesus Christ of Latter-day Saints, Strong served as a bishop for the church from 2009 to 2014. "I experienced personal growth and did the most good of my life," he said. "I distributed church welfare resources to families in need, helped and counseled people to gain employment or improve their employment, provided spiritual counsel and guidance and assisted couples and families to live together happily and successfully." He was also a full-time missionary for the church in Germany from 1980 to 1982.

Strong has also coached children in football and basketball and currently serves as Friends of Scouting district chair for the Boy Scouts of America, a group that he belonged to as a child, rising to Eagle Scout. His company is the official auto sponsor of Ballet West, a highly regarded ballet company in Salt Lake City, and supports Real Salt Lake, a Major League soccer team. He was chairman of the board for the University of Utah Crimson Club Athletic Fund, which raises money for scholarships.

Strong was recently nominated the 2015 TIME (magazine) Dealer of the Year award. The award is one of the automobile industry's most prestigious and highly coveted honors. Recipients are among the nation's most successful auto dealers who also demonstrate a long-standing commitment to community service. Strong, 53, was chosen to represent the New Car Dealers of Utah in the national competition – one of only 55 auto dealers from 17,000 nationwide – nominated for the 46th annual award. The award is sponsored by TIME in association with Ally Financial, and in cooperation with NADA. A panel of faculty members from the Tauber Institute for Global Operations at the University of Michigan will select one finalist from each of the four NADA regions and one national Dealer of the Year. "I wouldn't be here today without my father and grandfather and am obligated to excel and succeed for the next generation," nominee Strong said.

Blake and his wife, Cindy, have four children.