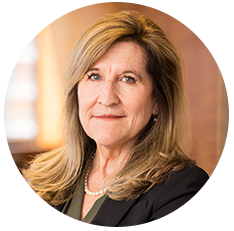 Sally McMinimee’s practice focuses on family law.  Her practice involves representing individuals in divorce with a focus on large marital estates, complex business and property divisions, and all other areas of family law.

Sally has also served as a federal receiver in an SEC action in Nevada and additionally has served as counsel to the receiver in a large Utah-based receivership.

Sally is a well-known and widely respected practitioner.  Prior to joining RQN, Sally practiced at Prince Yeates, where she twice served on the Board of Directors, and served as president for 2 years.  She is admitted to practice in Utah and Idaho.

Sally maintains an AV Preeminent rating with Martindale-Hubbell, which is the highest rating awarded to attorneys for professional competence and ethics.  She has also been voted by her peers throughout the state as one of Utah’s “Legal Elite,” as published in Utah Business Magazine.

Sally is a fellow of the American Academy of Matrimonial Lawyers (AAML).  She is highly involved in the community and is recognized for regularly providing pro bono services.  Among other significant recognitions, Sally was recently selected as the 2019 Family Law Lawyer of the Year by the Family Law Section of the Utah State Bar.  She has been included on the list of The Best Lawyers in America 2020 in Family Law and was named the Best Lawyers 2020 Family Law “Lawyer of the Year” in Salt Lake.