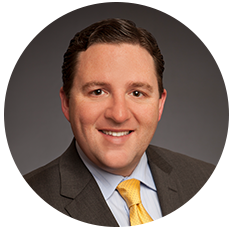 Robert is a Senior Vice President and the Economic and Public Policy Officer for Zions Bank. In this capacity he monitors and reports on economic indicators and public policy developments for the bank. Founded
in 1873, Zions Bank is Utah's oldest financial institution and it operates locations in communities throughout the Intermountain West.

Robert's research interests are primarily in the areas of macroeconomics, demographics, financial markets and public policy. He frequently advisesand briefs policymakers, as well as business and civic groups throughout the United States. He is also regularly called on to give expert analysis in the media, through print, radio, and television. He is known for his insightful and understandable approach to explaining economic trends.

Robert serves on a number of boards and commissions, including the Utah Economic Council, the Utah
International Relations and Trade Commission, and Envision Utah. His previous experience includes time as the Governor's Deputy Chief of Staff for Federal Relations, the Governor's Chief Economist and the State Demographer, where he served as the Chair of the Governor's Council of Economic Advisers, Chair of the Utah Population Estimates Committee, and President of the Wasatch Front Economic Forum.

Robert received a Master’s of Public Administration with an emphasis in economic public policy at the
University of Utah, where he is currently an adjunct instructor of public policy.

Robert is married and the father of four children.