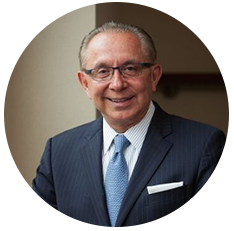 For Mickey Ibarra, advocacy has always been a way of life. It was in that role he honed the leadership skills that led him to the White House senior staff of President Bill Clinton, the creation of his own business and the development of the Latino Leaders Network.

The Ibarra family journey began in Mexico. Ibarra's father, Francisco Nicolás Santiago Ibarra, emigrated from Oaxaca to Utah in 1945 as a farm worker in the "bracero" program, a federal initiative created to bring laborers from Mexico to work U.S. crops during World War II. Francisco married teenager Bonnie Bird, a farm girl from central Utah. They had two sons, Mickey and David. Francisco joined the military and served a tour of duty in Germany. The boys' mother, who was left to raise the two sons, placed them with foster parents. They became wards of the state when their parents divorced.

When Francisco came to visit, he would take one boy on each knee and, reminding Ibarra to look after his younger brother, tell the boys that success was in their own hands. When they achieved it, he'd say, they should remember they have many people to thank. If, however, they were to fail, they would only have themselves to blame.

After his military service, Francisco returned to Salt Lake City to work for Kennecott Copper on a demolition crew. He left after 15 years to attend school on the G.I. Bill and then start his own small business as a hair stylist in Sacramento, Calif., where the boys rejoined their father. Ibarra attended high school there and became president of his senior class. Though small in stature, he became a star football player. He served in the Army from 1970 to 1973. Like his father before him, he served in Germany and attended college on the G.I. Bill.

He is a graduate of Brigham Young University, with a Master's in Education and an Honorary Doctorate of Humane Letters from the University of Utah. He taught at-risk high school students for five years. Involved in the Utah Education Association, he became a member of its executive committee. Subsequently he moved to New Mexico, where he served as executive director of the National Education Association's Albuquerque affiliate.

A stint at NEA headquarters in Washington, D.C., followed. As its political manager, he assisted with training NEA members in state government affairs and federal candidate support. In 1997, Ibarra served as Assistant to the President and Director of Intergovernmental Affairs at the White House, serving as one of the highest-ranking members of the President's inner circle. His role was to build support for the President's policy initiatives and to coordinate outreach to state leaders on a broad range of issues.

Ibarra left government at the end of President Clinton's term and launched his own government relations and public affairs consulting practice in the nation's capital. He has quickly built a client list that includes corporations, associations and non-profit organizations. In 2012, he received the inaugural Medallion of Excellence for Government Relations from the U.S. Hispanic Leadership Institute and in 2014, was presented the premier Community Champion Award by the U.S. Hispanic Chamber of Commerce. In 2013, Latino Magazine named him one of the "Top Latino Lobbyist" in DC.