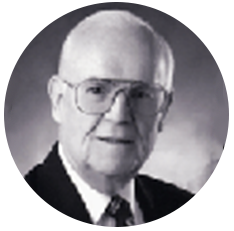 Edward R. Christensen has achieved wide intellectual accomplishments in a variety of academic and professional fields and is devoted to civic and social service. He graduated from the University of Utah in 1948 with a B.S. in Chemistry and an M.S. in Chemistry in 1949. Edward then completed his Ph.D. in Anthropology in 2009. During his career as a research chemist with Texaco, Inc., Mr. Christensen earned an M.S. in Industrial Administration from Union College.

After retiring in 1985, Mr. Christensen worked for Albany Savings Bank. He and his late wife returned to Utah in 1991 where both became docents for the Utah Museum of Natural History. This led Christensen to complete a B.S.,  an M.S. in Anthropology, and his Ph.D. in Anthropology at the U of U. Currently. Throughout his life, Mr. Christensen has given countless hours of service to community organizations such as the United Way, the Chamber of Commerce, the American Cancer Society, and the American Red Cross.