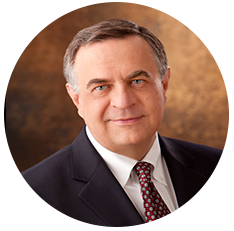 David L. Buhler was named as the eighth Commissioner of Higher Education by the Utah State Board of Regents in 2012. As Commissioner he is responsible for making recommendations to, and implementing the policies of, the State Board of Regents, which is the governing board of Utah's eight public colleges and universities. Commissioner Buhler comes to this position with a long history of service in higher education, state and local government, and business.

Commissioner Buhler served twelve years as an elected official, including two terms as a member of the Salt Lake City Council (2000-2007), and one term as a Utah State Senator (1995-1999). On the City Council he served as Council Chair in 2002 and 2006. In the Senate, he served as Senate Chair of the Administrative Services and Capital Facilities Appropriations Subcommittee and Vice Chair of the Executive Appropriations Committee. He served eight years in state government including four years as Executive Director of the Utah Department of Commerce (1989-1992) and as a member of the staff of Governor Norman H. Bangerter (1984-89). He was also an executive in private business with a national testing firm for eight years (1992-2000).