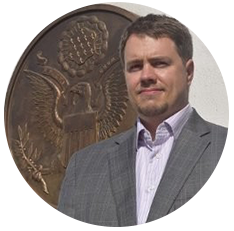 D. James Bjorkman, '05 Political Science, is a Foreign Service Officer with the U.S. Department of State. He works in the U.S. Embassy in Georgetown, Guyana where he is the Political and Economic Counselor to the Ambassador. He has previously worked at the embassy in Nicaragua as Immigrant Visa Unit Chief and American Citizen Services Unit Chief and in several U.S. Department of State offices in Washington, D.C.