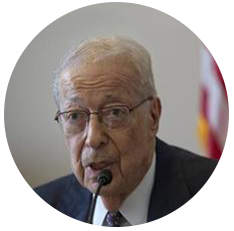 Rocco C. Siciliano is recognized nationally for his lifetime of dedicated public service, as a decorated combat infantry platoon leader in Italy with the 10th Mountain Infantry Division, and for his leadership in the corporate world. He was named to the Hall of Fame, Infantry School, Fort Benning, Georgia. In 2001 he was awarded an Honorary Doctorate at the University of Utah and was also selected, following appointment by the President, as the Chairman of the Dwight D. Eisenhower Memorial Commission in Washington, DC.

His memoir, Walking on Sand: The Story of an Immigrant Son and the Forgotten Art of Public Service, was published in 2004 by the University of Utah Press.

Born in Frankfurt am Main, Marion Stiebel Siciliano, now deceased, was a well-known abstract artist. She fled Nazi Germany in 1938, immigrating to Boston, where she later graduated from Simmons College. Her hard-edged, precise geometric paintings, vibrantly colored, expressed her views of the world. Ten of her works were acquired by the Skirball Cultural Center in Los Angeles. She created a scholarship program for the College of Fine Arts at the University of Utah.